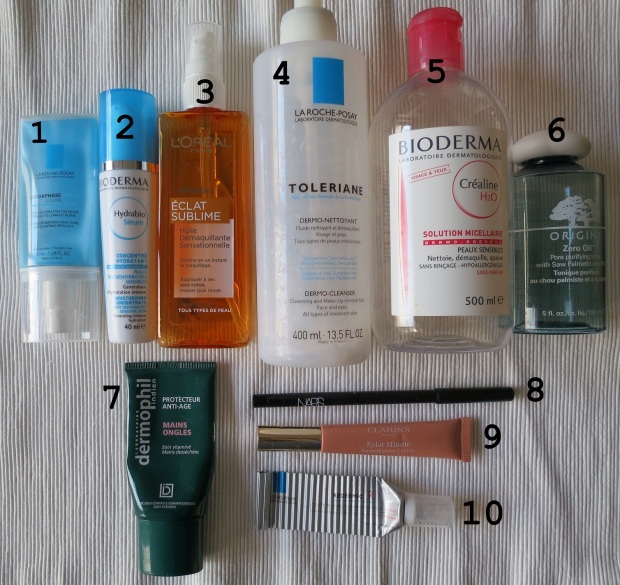 These are empties I collected the last few months actually. Prepare for a long post!

1. La Roche-Posay Hydraphase Intense Légère (50ml) – Made in France
I switched from Toleriane to this because I was bored but didn’t want to stray too far. The thing I noticed straight away is that Hydraphase is scented with one of those aquatic smell that hopes to conjure up the ocean. As the name suggests the texture is very light, but perhaps not quite ‘intense’ as I wished it to be. It wasn’t quite enough for the colder months but I think it would make a very lovely summer moisturiser.

The packaging is interesting – the product itself is in a bag that’s contained within the plastic tube. You can see how far you’re going but there’s nothing you can do to squeeze or pump the last bit out unless you’re determined to cut the tube open somehow.
Repurchase? Probably not.

2. Bioderma Hydrabio Serum / Moisturising Concentrate (40ml) – Made in France
For ‘very dehydrated, sensitive skin … generating intense hydration’. You can use this alone or before your moisturiser. I expected a serum like texture: almost runny, clear, half gel half liquid you know. But the texture is more a creamy gel, thickish. It also has a marine type of scent.
I didn’t really like this one and found it lacking in moisturising properties.
Repurchase? No. You’re better off getting the Hydrabio moisturiser, which I suspect has the same formula only less thickener or whatever. The moisturiser is cheaper and I think a superior product. This is not what I expect for a ‘serum’.

3. L’Oreal Eclat Sublime (150ml)
L’Oreal’s cleansing oil, I can’t remember when this one came out but I bought it pretty much as soon as I saw it at my local Monoprix. I use 3 pumps of this to get my makeup off. It has some kind of perfume that I’m not a fan of. It’s quite runny and feels ‘oilier’ than the other cleansing oils I’ve tried. I know that just sounds crazy but I don’t know how else to describe it. I don’t think that orange bottle helped. Performance-wise it cleanses very well, even long and hard wearing eyeliners and mascara. However it does sting your eyes if you get too close.

So I was looking through the stash drawer to see what I can bring with me for my upcoming trip and found my guy’s dermophil indien hand balm. I mentioned this when I was writing about one of their handcreams I tried that’s available in supermarkets. This is a 30ml tube and you can only buy them in pharmacies. Here are a couple of photos to give you an idea of the size: END_OF_DOCUMENT_TOKEN_TO_BE_REPLACED

It’s been a while! I’ve got no excuses. Here’s to get the ball rolling – empties!

Title says ‘May Empties’ but they’ve been put aside for a couple of months – meant for an empties post. So this is everything I’ve accumulated during my MIA. They are mostly creams, I hardly finish makeup … 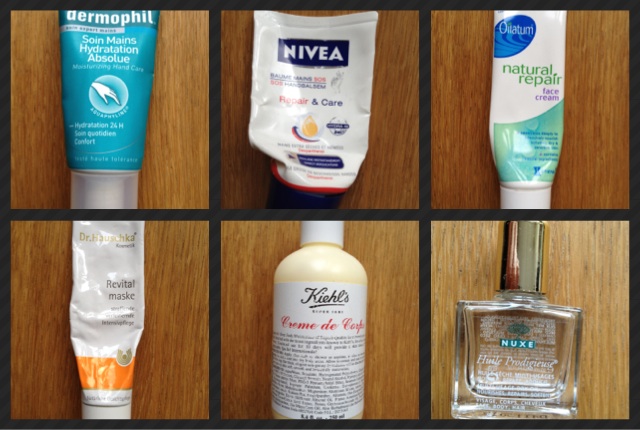 dermophil Moisturizing Hand Care (75ml)
dermophil (as far as I know) is an old brand best known for their moisturising balm in a stick. It’s like a swivel stick lip balm only 10 times the size, called dermophil indien and you can only buy it at pharmacies because it’s marketed as a kind of medical treatment. The stick is excellent for extremely dry skin, cracks from cold weather and so on. The company has branched out and I’ve noticed quite a few of their products for hands and lips at the supermarket since beginning of the year. They are not sold under the name dermophil indien, just dermophil. I see it as more daily, ‘casual’ use. The hand care cream I tried was purchased from my local monoprix. END_OF_DOCUMENT_TOKEN_TO_BE_REPLACED